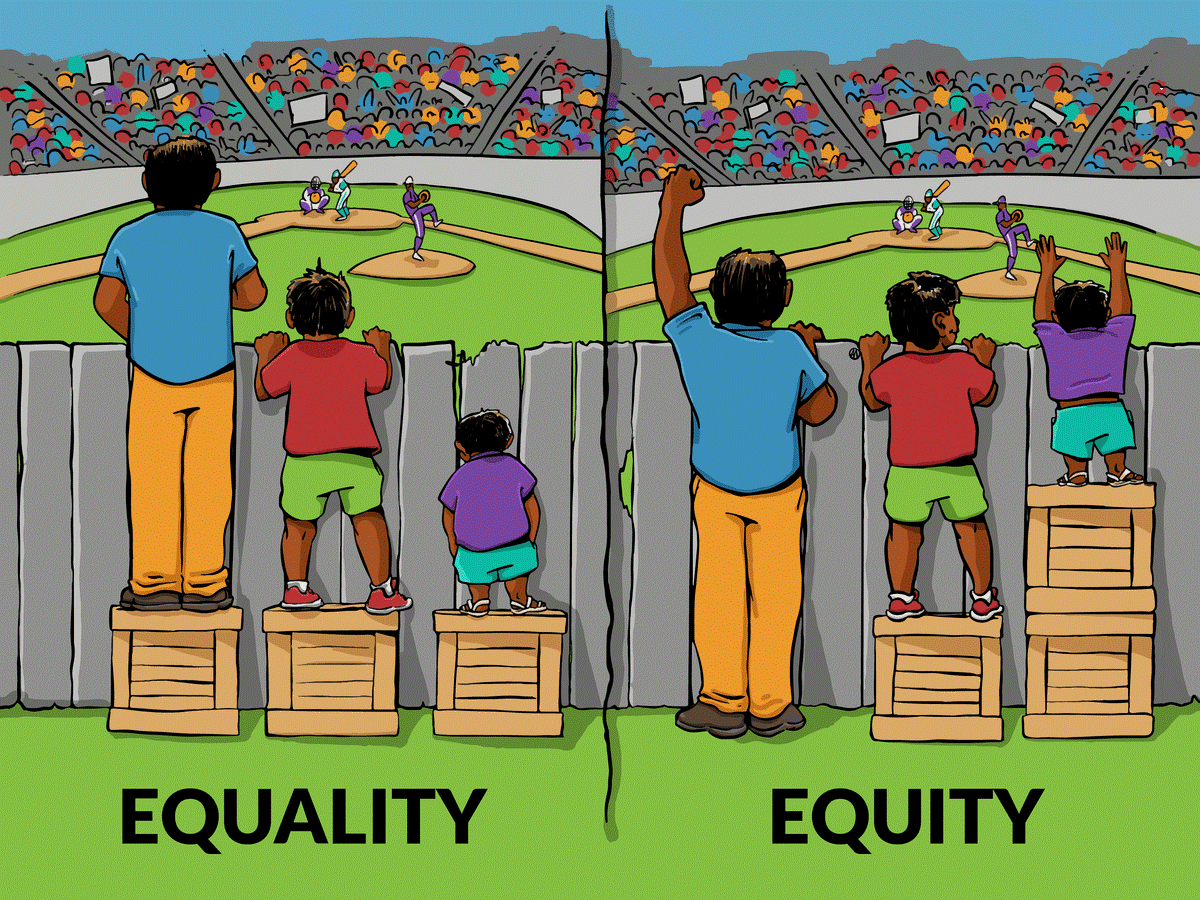 The first Collective Impact Learning Community session of the year included the opportunity to hear from cohort member and Metro Human Relations Commission Executive Director Mel Fowler-Green on Systemic Inequality and Equity Frameworks. Equity is the base on which the collective impact framework should be built, and it is defined by Mel as, “just and fair access and inclusion into a society in which all can participate, prosper, and reach their full potential.” Without an intentional focus on equity, collaborative efforts can unintentionally reinforce patterns that uphold disparities.

Mel began discussing equity using the common graphic of children of different heights trying to see a baseball game over a fence. Equality is represented by giving each person a singular box to stand on, whereas equity is exemplified by providing each child with the number of boxes they individually need to see over the fence. While a common representation of equity, challenges to this graphic arose. This picture rests inequity in the person, putting the emphasis on the person’s inability and not on the fence system. Mel explains, “If this is supposed to be a metaphor for other inequities, it fails to adequately represent the sources of those inequities.” Mel used the example of the education system and disparate outcomes of students from low-income marginalized communities. If you consider this graphic in the realm of education it would suggest that disparate outcomes are due to the metaphorically “shorter” ability of students in low-income communities of color while in reality it is from the unequal opportunity that these groups have been afforded, which is rooted in a history of inequality. Members of the cohort suggested tearing down the fence and liberating the children, and were encouraged to expand upon this mindset using this guide.

The focus of Mel’s presentation was systemic racism which manifests in all parts of society and encompasses individual, institutional, and structural inequities. Despite the abolition of slavery and Jim Crow laws, civil rights legislation, and numerous workshops, trainings, and educational opportunities intended to end racial disparities, these inequities continue to persist.

Mel unpacked the complex interaction of anti-black laws and practices, unjustly gained power of whites, inequalities witnessed along racial lines, and attitudes that uphold white privilege and power using one simple statement, “It’s about where you live.” The statement considers two major factors of racial inequity that have persisted across centuries: access to resources and homeownership. Access to resources encompasses neighborhood aspects such as supermarkets, schools, workplaces, transit, safety, and green spaces. Homeownership is tied to worth, access to capital, health, stability, educational achievement, and civic participation. Mel utilizes the prominent example of New Deal redlining in comparison to current incomes to reinforce the importance of where an individual lives.

New Deal redlining was the process of creating security maps that outlined areas where the federal government should and should not provide loans for mortgages. A single black family in a neighborhood would cause the area to be delisted or labeled at high risk for loaning. This created and maintained segregated schools as well as locked blacks out of the greatest opportunity for wealth gain in history. Mel then compared this 1930s map to the 2012-2016 Opportunity Atlas map of current household incomes, showing that low income areas almost exactly aligned with areas delisted during redlining. These almost 100 year old maps have caused lasting negative impacts.

Mel continued to highlight the importance of where people live and the lack of societal awareness around historically racist policies following her workshop when she was asked what historic event she wish was taught in textbooks. Mel discussed the full legacy of Brown v. Board of Education which includes the mass firing of black educators and shunting of African American students in newly integrated schools. The Supreme Court ruling is often championed for outlawing explicit segregation policies, while the disparate effects of a lack of black educators in schools is not mentioned. Research has shown that there are negative consequences for student success when faculty and staff do not reflect the diversity of their students. White teachers are less likely to identify gifted and talented skills among students of color and have lower expectations for black students completing a four-year college degree. Mel writes that it should be taught that the Supreme Court ruling “resulted in a mass firing of black educators that still today has a negative impact on public schools nationally.”

How does this continue?

How and why do racist policies and systems continue to be perpetuated in this country? Lack of intent, belief in individualism, seemingly neutral social structures, white privilege, the myth of colorblindness, and most importantly, invisibility. Even those who are working to combat disparity may not see the ways that racism has contributed to and built today’s structures, making this conversation and audience all the more important.

While Mel believes that nonprofits are in a unique position to lead on equity, when asked what one thing Mel would share with nonprofit leaders on equity, she responded, “Systemic change is going to require getting your board and funders into the conversation. Commitments to equity will necessarily mean changes to resource allocation and power structures in your institution. Staff training, community empowerment, and diverse leaders within the organization are all important. But having a board and funders who trust you to make the changes are critical.”

To hear more about the topic of equity and how to combat inequity in your work, register here for Mel’s next workshop, “Implementing Equity Frameworks: Creating Systemic Change” on April 25th.

In the meantime, explore these recommended resources:

What to Expect from a CNM Consulting Engagement